Your City
DART: Improving “The Street” One Building at a Time
The Downtown Aberdeen Revitalization Team looks to boost Aberdeen businesses and consumer activity by buying, renovating, and selling buildings in Downtown Aberdeen.
By Patrick Gallagher | July/August 2021 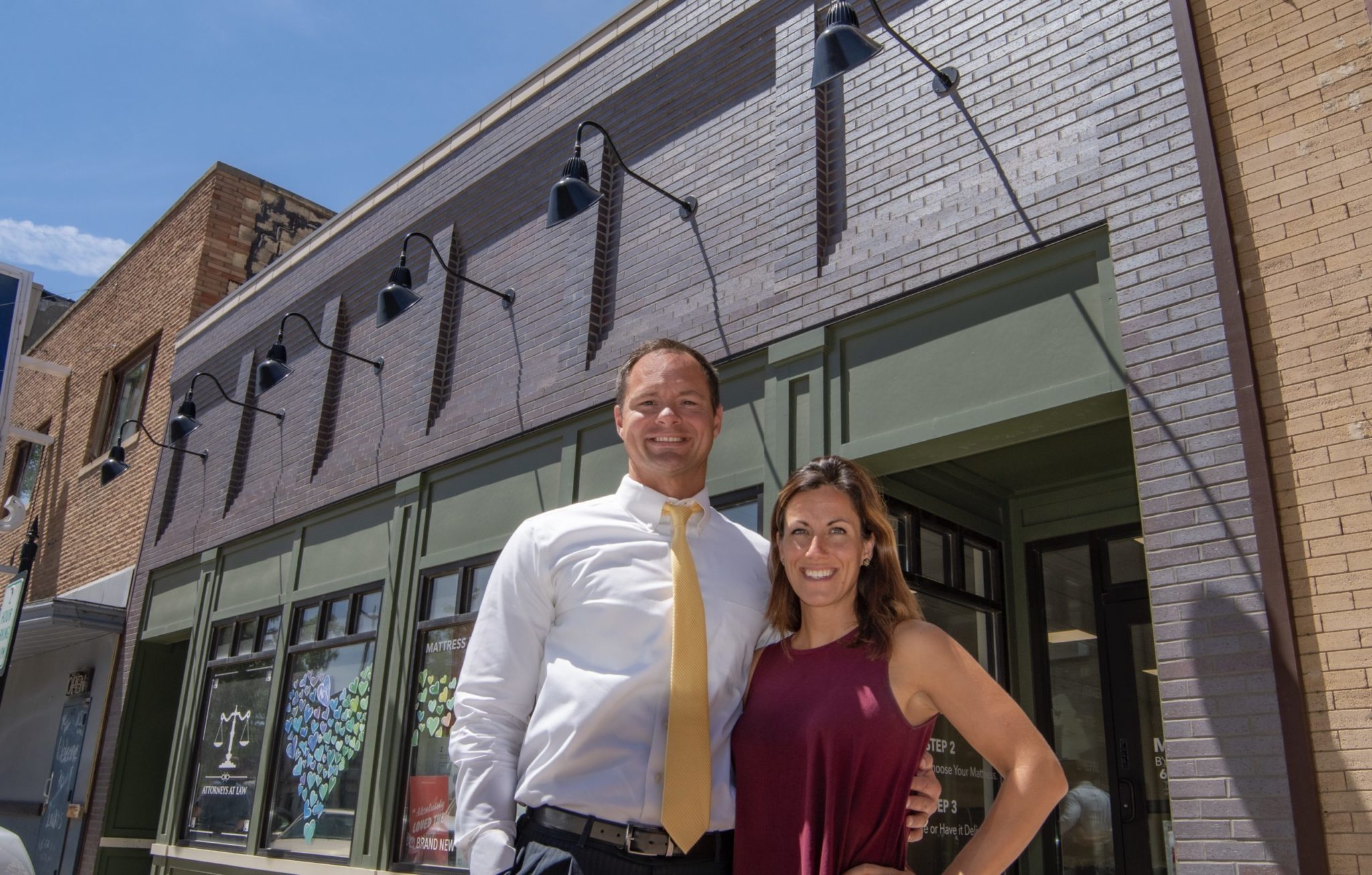 Tom and Abby Cogley bought a DART building at 420 S. Main in 2020 for their respective businesses; Cogley Law Office and Mattress by Appointment.

It all started with an eyesore.

About six years ago, Co-Op Architecture principal architect Tom Hurlbert visited with Rod Fouberg, retired Dacotah Bank chair, about a rundown building on Main Street that they wished they could renovate. That opportunity did not materialize, but it led to a much larger discussion about what could be done to create, as Rod put it, “a better looking street.”

Before long, Tom and Rod brought in Siegel, Barnett & Schutz attorney Rod Tobin to create the Downtown Aberdeen Revitalization Team (DART) with a mission to upgrade Main Street buildings to make it easier for businesses to start up and grow. It was a new approach. As Rod Fouberg pointed out, “A lot of activity downtown had come from either the City or nonprofits,” or from businesses doing their own upgrades. DART would be a for-profit group organized, essentially, to flip buildings. The process would involve buying, renovating, and selling buildings to owner—occupied businesses–no absentee owners—that would drive more foot traffic downtown. Three buildings later, the partners see their impact, and so do others.

“The question is how do we clean these buildings up as a community, and how do we make Main Street more viable for the long-term benefit of Aberdeen, building property values and such?” Tom said. “We can see the potential of downtown as a generator for property tax, sales tax, tourism, retail activity, the arts, and more housing, but attacking it alone isn’t viable, both financially and in terms of horsepower.” So the team went in search of people with similar views and money to invest.  “That was kind of the pitch,” Tom added. “Not to make a bunch of money but to make community.  This isn’t the silver bullet for downtown. It’s just another piece of the puzzle.”

In looking for those investors, Tom mentioned Rod Fouberg’s advantage as a 45-year member of the core area community of business owners, managers and employees.  Rod said he “approached people in the core area who had an interest in Downtown. We raised $220,000 from 19 investors [who] came from up and down the street,” or had a strong tie to the core area.

“DART made clear to the investors from the onset that this was an endeavor that most likely would yield no return on their investment and, in fact, it was possible that the initial investment would be lost as well. DART was always portrayed as a community/downtown support effort, an effort to preserve Aberdeen’s downtown historic aesthetic,” Rod Tobin said. So what did the investors get out of it? “Revitalizing downtown buildings and facades was the proposed compensation for the investment,” he explained. Virtue is its own reward, the Stoics said, and this probably took some stoic gumption. Rod Fouberg added that occasionally the investors also got to “pay a little income tax on some profit.”

It must have worked. More than five years later, DART retains the same 19 investors who first signed on in the early endeavor. They are silent investors, as Tom, Rod Tobin, and Rod Fouberg are the managing members of the limited liability corporation, and they make the purchase, remodel, and sale decisions.

While those three are the key players, Tom noted, “Heath is super helpful with his real estate background—sort of a de facto member of board.” A principal in Dakota Plains Commercial Real Estate, Heath Johnson maintains that he is an investor in DART with no input on decisions. “I help them acquire or move buildings,” Heath said. “I’ve been involved in all four buildings by helping acquire the property, by selling it, or both.”

The fourth building Heath mentioned is 313 South Main Street, most recently a consignment shop, which DART purchased in late 2020. Renovations will begin in 2021. Rod Tobin said, “313 is a great DART project. While it does not possess the most ornate of facades, it is one that fits downtown well.” He mentioned one of the benefits the project can bring to buyers. “The other aspect that makes 313 a good DART candidate is that it has second floor residences. Our goal is for DART buildings to end up in the hands of owners whose businesses will occupy the store front. Second floor apartments help small businesses by providing a steady cash flow to smooth the peaks and valleys of their own business.” While having apartments is a plus, residential isn’t a specific goal for DART, and those improvements are up to the buyer. Only two of the buildings they have purchased so far have had apartments.

Just what is a DART project?

Generally, they look for smaller footprint buildings, and more specifically, “the low hanging fruit.” Simply, as Rod Fouberg put it, the building has to be “available and affordable,” and the plan is to do one building at a time. The basic DART project has included repairing the roof and improving the face of the building. Tom explained, “By doing the roof, we save the buildings from water damage. Doing the facade helps tell the story and inspire somebody” to buy, launch a business, and help grow downtown. Another goal, he says, is “to honor the historic design of the buildings. We work from historic photos of the buildings and try to replicate [them]. There’s value to our historic downtown.” Plus, the architect working with an attorney and a banker said, “It’s also easy to agree on historic value and look compared to design, which is a taste thing.” 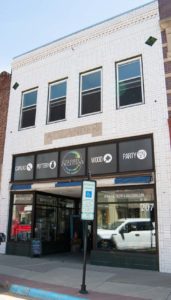 The 1912 A. Olander building at 207 S. Main features glazed bricks and ceramic tiles in the facade. It was purchased by Carly and Cory Pochop and became the home of Carly’s business, Colorful Creations.

The three completed projects to date have been The Workshop at 208 South Main Street, purchased first by the Aberdeen Development Corporation and sold later to the Aberdeen Downtown Association, both of whom have operated it as a shared workspace meant to assist small businesses. The second project is directly across the street at 207 South Main Street, purchased by Carly and Cory Pochop, whose Colorful Creations occupies the main floor with three apartments on the second floor. The most recently completed project is at 416 and 418 South Main Street, purchased by Tom and Abby Cogley and home to their businesses, Cogley Law Office and Mattress by Appointment. This project was complicated by the discovery that the front of the building was actually leaning toward the street. Repairing it cost more, but the result is still an authentic historic renovation. Abby noted that the facade is “one of the main reasons we were drawn to buying the building,” and they receive many compliments on it. 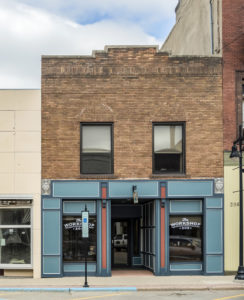 The Aberdeen Downtown Association recently sold their DART building at 208 S. Main. They used if for their offices and a shared workspace for small businesses.

But it still took the Cogleys a couple of looks to say yes. They had become serious about looking for space when Abby’s shop in Super City Mall flooded in a water main break in 2017. They wanted to find a place that could house both businesses. Tom Cogley, the attorney who had been working downtown since they moved to Aberdeen in 2010, enjoyed being in that area and liked being able to walk to the courthouse. Abby wasn’t sure a mattress store would fit the “boutique vibe” of Main Street—for example, boutiques don’t usually need to take deliveries from semis. In fact, in 2018, they looked at both the building they ultimately bought and what became Colorful Creations. They passed on the latter because Abby knew she did not want to manage the apartments, plus, they weren’t sure both of their businesses would fit. About a year later in 2019, they took the plunge. It helped that Tom Hurlbert sketched out the space.

And it’s worked out well. “I love it in here,” Abby said. “My sales have gone up.” Also, although she had worried that the law office wouldn’t be big enough, “Tom’s [Cogley] offices are right-sized, not over-sized, not like a 1960s-style lawyer’s office that looks like a den.” She added that working with DART was very easy. “We knew our boundaries and knew we could walk away,” she said. “There was good transparency in the working relationship. They knew we wanted it, and we knew they wanted to move it and get it occupied. DART liked our business. We would be owner-occupied and bring people downtown.” All in all, she concluded, “Working with DART was fantastic.”

Is the DART model working?

From Rod Fouberg’s perspective, it’s simple: “I feel good when I walk or drive by the buildings.”

Similarly, Tom Hurlbert believes “We’ve made a difference,” but he added, “You don’t know if you’ve inspired people to think more about downtown.” Looking at the big picture, he noted, “Downtown development requires a lot of cooperation from many partners, including the City, business owners, and developers. We’re not the ocean; we’re a wave. I do think there’s good momentum downtown.” He came back to their unique and community-minded approach, “Nobody else is doing what we’re doing because DART is not in the money-making business. We’re not here to lose money, but we’re not big into money making.”

Money-making or not, Heath Johnson agreed DART is the only group flipping buildings on Main Street, and he believes they’re “very successful in doing what they set out to do. It’s a successful model, and it’s helping property values downtown.” Heath suggested another benefit: “A lot of buildings downtown are 60 to 100 years old, and we’re essentially buying another 60-100 years in these buildings.”

Aberdeen Downtown Association executive director Shelley Westra-Heier said the impact of DART’s work is “much more than people can visually see. They’re breaking down barriers for people who want to own a business but can’t afford to fix the façade, the roof, and so on. They’re making it easier for a business that wants to start up or expand. That’s critical for downtown.” More broadly, she added, “There’s a positive impact on property values that isn’t visible but is beneficial for downtown and the whole city. There’s the impact of the increased business and the virtuous cycle it creates.”

They may not have been eyesores, but the buildings that DART has improved have had a lasting effect on Aberdeen. Summing up her estimation of the group’s impact, Shelley says, “Can we have more than one DART organization in town? Please?” //