Your City
A Home Away From Home
Forte offers international exchange students the opportunity to experience American culture right here in Aberdeen.
By Josie Clemens | November/December 2021 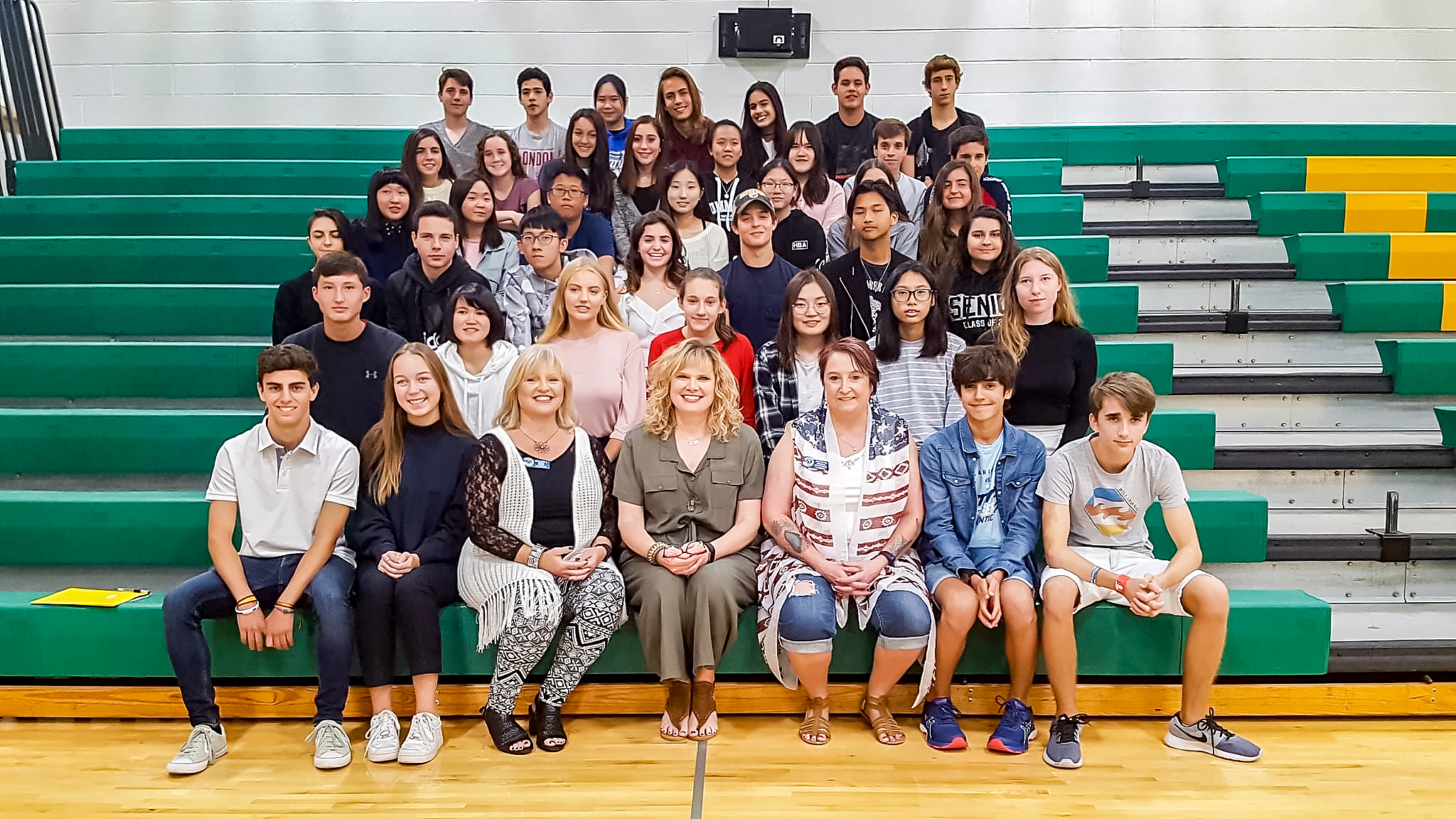 Do you ever wonder how international exchange programs for high school students work? Is it as simple as purchasing a plane ticket? Unfortunately, no. There are many moving parts when it comes to being an exchange student. Forte International Exchange Association is one significant gear in the system.

Forte is a national non-profit sponsoring organization that works with overseas agents to place high school exchange program participants in the United States. Local representatives and area directors within Forte are the point of contact with those agents to find host families in the region for those students. Aberdeen is just one of the many locations where international students can experience American culture in the school and community.

For this school year, Forte has placed around 300 students nationwide with nine students in Aberdeen—eight at Central High School and one at Roncalli High School.

Forte’s Area Director Melissa Erlenbusch plays a large role in the organization’s ability to successfully place students in the area. She takes a hands-on approach in the process from start to finish, and every student through Forte becomes family to her.

“Forte being a smaller company, smaller organization, that the student and family connections are stronger because there is that someone to work through every step with you and any problem with you,” Melissa said.

“I was so impressed with how Forte runs their business that I wanted to work for the company. I wanted to help make these dreams come true, these connections made,” Melissa explained.

Heidi Morlock, the regional development director of 12 states including South Dakota, has been with Forte for 10 years and feels the same way about the organization as Melissa. “The rewards are so many! Each student comes to the exchange program for different reasons. It is rewarding to help each of them accomplish the goals that they set when applying for the program,” Heidi said.

Forte offers exchange students an opportunity to be fully immersed in American culture. Participating in an exchange program is a once-in-a-lifetime experience.

The process for the students to participate in the program involves patience and a mass of paperwork.

First, the students apply to an organization within their own country. Once they are approved, the organization will begin the screening process with an in-home interview. This interaction is in English to check if the student’s speech is sufficient to participate in school in the United States.

After this step, the months of paperwork begin. Students need recommendations from teachers, dentists, and doctors, a physical health test, government forms, application for Visa, vaccinations, transfer grades, and financial statements from the state to prove that the family can afford the program.

All of the forms need to be approved before the steps to be placed with a host family begin. The average international student waits about six months before learning where they will be living as an exchange student.

The overseas agencies that the international student applies through will choose Forte to help place students with host families. Local representatives from Forte also prepare host families to make sure students have a credible and suitable home waiting for them.

Melissa is always looking for parents in Aberdeen and surrounding areas to become host families for exchange students.

The process to be a host parent is not as complex as one might imagine. An application and background check are completed first. Once those are passed, Melissa or a local rep from Forte will come to the house for an interview and inspection.

The responsibilities of the host parent are to provide a bed, dresser, and three meals a day for the exchange student. “As a host parent, there isn’t a lot of extra costs involved,” Melissa said, besides food on the table and extra time to help give rides to experiences like sporting events and meeting up with friends.

Kaylene and Mark Sauer have been a host family in Aberdeen for three years. Through their experience, they have learned that the most important thing as a host parent is to provide a loving home for the teenagers and understand that these students have moved thousands of miles away from their family.

The exchange program is an amazing opportunity for both the students and host families. International students bring a new culture with a different view of the world that unlocks a new perspective for anyone who has been a host parent.

“My favorite parts of hosting are learning about their culture, having the opportunity to learn a new language, meeting them at the airport, and seeing their faces light up when they come into my home,” Alemita Shelton, a local representative in Aberdeen, said.

Melissa advises anyone who is curious about being a host family to start as a “welcome family,” which is the same concept but for a much shorter period. A welcome family hosts international students for four to eight weeks compared to one or two semesters. From there, the family makes the decision to stay as a host family for the student or have Forte find another family for the student.

“It is a very rewarding experience. As a host family, you learn a lot about their country and customs. In turn, they learn about the U.S. and our customs in the Midwest,” Kaylene said. “We gained some new daughters, and they have gained an experience that will last a lifetime.”

Aberdeen has so much to gain from Forte’s international exchange students, too. These individuals come from every part of the world. While they are here to dive into American culture, the community can learn from the students’ own cultures.

Forte expands the culture in the community. For the people who might not be able to travel to different parts of the world, the exchange students can share their recipes, traditions, language, and differences.

Likewise, Midwest culture offers many learning opportunities for international students. Aberdeen and surrounding communities are all great locations for students to be placed because small schools give exchange students more opportunities to meet new people and recognize familiar faces.

Forte is a catalyst for all these positive experiences that help connect people from all around the world, benefiting both the student and our communities. //

If you are interested in being a host family or have questions about Forte International Exchange Association, you can call Melissa Erlenbusch at 605-460-1763 or email [email protected]. 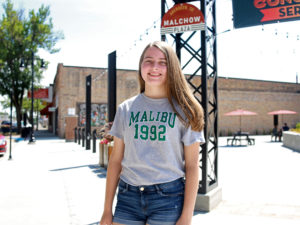 Tess Van der Bel was one of the 10 exchange students at Central High School for the 2020-2021 school year placed by Forte International Exchange Association.

Tess left her mom, dad, older brother, and all the rainy days in the Netherlands to live 10 months as an exchange student in the United States, something she dreamed about for six years before it became a reality. Her inspiration sparked from watching American movies, wanting to experience it herself.

At 16 years old, Tess turned in her application to a Dutch organization, and the in-home interview took place shortly after. In November 2019, eight months after applying, Tess was ready for her placement.

She arrived in Aberdeen on Aug. 17, 2020—the night before classes started at Central. She lived with her host parents, Melissa and Larry Erlenbusch and host sister Kincso, an exchange student from Hungary.

One thing that startled Tess was the landscape of the Aberdeen area. She expected mountains because of her research on Mount Rushmore, but she quickly realized her environment would be quite the opposite.

Her first week in Aberdeen was overwhelming but not as big of a culture shock to Tess as she envisioned. The little differences that she noticed throughout her stay, however, were unmistakable—like the excess of butter and sugar in our foods, small talk, Midwest attire, South Dakota winters, and the sports culture of Aberdeen.

The top three things that Tess enjoyed the most while living out her dream as a student in the U.S. was participating in track, going to the football games with her friends, and experiencing homecoming.

“I really enjoyed going to all the sport events at Central, especially American football because it’s just something so American. … Everyone was just like in the movies, and I just loved it. You started with the national anthem, there were cheerleaders, everyone was cheering each other on, and it was just a lot of fun to watch,” Tess said.

Tess’s experience in the classroom took some time to adjust to because of how different the school system is from the Netherlands. “However, school was a lot of fun here in America. There were a lot of school events and there’s something for everyone to do. There are musicals, sports, show choir, and lots of other things. There’s also a huge amount of fun classes you can take like photography and food concepts,” Tess said.

And as far as American food, walking tacos are a clear favorite for Tess. American candies, on the other hand, took a little more convincing for her. Twizzlers were a definite no, but she did find a few good selections in Sour Patch Kids, Airheads, and Lemonheads.

The experiences and knowledge that Tess gained from being an exchange student were all life-changing, she explained, and she’ll take those memories with her as she moves on to her next adventure. //